Last night was Halloween, a night when we warmly open our doors and hand candy to children dressed in all manner of costumes, hearing their squeals of laughter as they fill their Halloween bags. It’s an evening for reminding us of the joys of childhood and also the perfect night to close out Freddy Krueger’s month on Wall Street.

October truly was a Nightmare on Elm Street. Concerns abounded, principally focused on the trade war, rising interest rates, projected lower corporate earnings in 2019 and the weakening of the world’s economy outside the good old U.S. of A.

Does it make sense that one–fifth of Amazon could evaporate in thirty days and that this result would not ultimately prove illusory? I think more likely than not that it’s a Halloween trick.

I’d rather bring you a Halloween treat.

If this was a wrestling match, then in October those fears pinned our fifty-year low unemployment rates, our second quarterly 3+% GDP growth which is 50% higher than we experienced during the previous four years, our double-digit corporate earnings, our annual wage gains of 2.8% leading to what some experts have called the “best job market in a generation,” our increased consumer confidence and the impetus the economy received from reduced corporate tax rates. 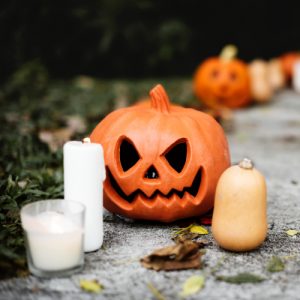 All three market indexes fell and fell hard. The Nasdaq Index fell 9% for the month, making October the biggest monthly drop since November 2008. Amazon and Netflix, two tech favorites, both lost about one-fifth of their value. Stop. Reread my last sentence. Twenty percent of the entire market cap of Amazon disappeared in the snap of the market’s fingers which was as quick as David Copperfield makes a train or an audience disappear.

And it’s just as ephemeral, I believe.

Does it make sense that one–fifth of Amazon could evaporate in thirty days and that this result would not ultimately prove illusory? I think more likely than not that it’s a Halloween trick.

I’d rather bring you a Halloween treat.

To do that I’m reprising a story about children, their innocence and the lessons they teach us about markets. Titled “Batter Up,” I wrote this piece almost a decade ago, after the month of March 2009, but you’ll see it has special currency today. For those with short memories, March 2009 was the month stocks bottomed out and the market then began its ascent, a strong nine-year climb which, notwithstanding October 2018, has moved the markets four-fold from those 2009 lows. I hope you’ll enjoy:

“The stock market’s returns in 2008 were the worst in seventy years, and to make sure investors felt the pain, a Force of Evil saw to it that the first quarter’s equity returns for 2009 were the worst for any first quarter since 1939. Investors now know how Sonny Liston felt when Muhammad Ali knocked him out that May 1965 night in Lewiston, Maine.

The list goes on and on, but you get my point. The last six months have been a cruel hoax to the millions of honest, hardworking, play-by-the-rules folks. They feel not unlike candidate Tom Dewey surely felt forty-eight hours after he finished reading the November 1948 election night Chicago Tribune headline declaring him the victor in his presidential race against Harry Truman.

So how about reading some good news for a change? There are certain verities in life: The stars come out at night; so does a rainbow after a hard rain. The Atlantic has a majestic blue-green hue in the Caribbean, the Pacific in Hawaii. Multi-hued tulips bloom here in April.

And kids don’t know about those bad news items; they experience joy in new ventures, especially when they’re too young to “know better.” And adults get happiness in watching their efforts and enthusiasm.

Last month Randy and I spent three weeks in Santa Monica where we visited with our daughter, her husband and their two children, Vivian age four and Isaac age six. The last Saturday we were there, Isaac and his neighborhood friends had their first T-ball game. For those who don’t know, T-ball is to Little League baseball as pre-K is to elementary school.

A baseball is literally placed on a stationary tee at home plate, set to the height of the batter’s belt. The batter swats it and then all hell breaks loose. Nobody makes an out. You play until the kids or their parents are exhausted, or until the six o’clock cocktail hour comes calling, whichever comes first.

Helmets, most of them three or four sizes too big, are worn at all times, both while batting as well as when playing out in the field. Teams can be comprised of 15 or more kids per side, it seems. And no matter what, your kids play with a smile on their faces and laughter in their voices.

None of these kids had likely ever played anything more than catch. They knew not the rules of baseball, nor what defined winners or losers. They just knew how to have fun. We could learn from them. Here were some Life Lessons they began to comprehend without even knowing it, and I was reminded of while watching the youngsters. (The kids’ names and their spellings were provided by my daughter).

The first batter up was Vonne, age 5. Like the mythical Casey, he struck a mighty blow with his bat and . . . whiffed, missing both the ball and the T. Thrice more the Mighty Vonne swung and missed. In T-Ball, the West Coast version, you get not three but five whiffs before you’ve struck out. On his last attempt, he barely managed to clip the ball and it slowly rolled toward the pitcher.

As the “pitcher” Cody, age 6, daintily bent to pick up the rolling ball, treating it like a flower to be plucked from her parents’ backyard, here came Vonne barreling into her, trying to get that pesky pellet before she did. He succeeded, only to learn from his umpire father George that first base, not the pitcher’s mound, was his intended destination.

A few batters later Jaxon, another 5-year old, stood on third base ready to score for his team, the Angels, when the next intrepid batter, Stella, hit the ball. Sure enough, Stella smashed one toward shortstop and Jaxon took off toward home. However, he didn’t stop upon landing there but rather continued sprinting toward first base. He actually nosed out Stella by an eyelash. Lesson number 3 was relayed to him by Jaxon’s laughing father.

Fugi, age six, was sent out to play second base by his manager-dad Glen with these words, “Go play second base, son.” Sure enough and taking his father’s words literally to heart, Fugi skipped out to the infield, his oversized hat wobbling on his tiny head, and jumped directly onto second base. From that perch, he fiercely defended his ground, even when teammate Everett tried to physically move him closer to first base.

Lesson #5. There’s joy in small things; before your game is over be sure to stop and smell the roses.

When the game ended, tied something like 35 to 35 after those two innings, all the parents and their kids had smiles and kind words for each other. It reminded me that great joys come from the simplest things. Bernie Madoff and friends to the contrary notwithstanding, life is not as bad as some would have us believe.

PS. The market went up 22% over those three weeks while I was out of town. One dear friend even texted me while I was in the L.A. airport waiting to return and beseeched me to stay an extra week.”

So there you have it. Don’t let the recent events of October cause you to lose your focus on the larger picture. We’ve had a great run for almost ten years. And today, our economic signs are as strong as they have been for that last decade. There’s always a Yin versus Yang, but if we call the Yin positive and the Yang negative, Yin’s going to pin Yang. Unless markets totally decouple from their underlying fundamentals, this market should continue its march forward.