“Thinking is one thing no one has ever been able to tax.” – Charles Kettering*

It’s March Madness time and I’m not talking about basketball. I’m talking about the 2017 tax reporting season and it’s full on! By now you have received your W-2, corrected 1099s and K-1s (hopefully). You haven’t even seen your accountant yet and I’m already talking about the 2018 filing season? Yup, it’s true and what better time than now to start thinking and planning for the impact of the recently passed Tax Cuts & Jobs Act. Here are some thoughts to ponder:

Ask your accountant to run a mock 2018 return after you have filed your 2017 taxes. You can also use TurboTax’s TaxCaaster tool (I downloaded it for free from the App Store and ran a 2018 tax estimate in about 10 minutes) to forecast a 2018 refund or payment due based on the new laws. Please note: The IRS and state tax divisions are still working through interpretation of various provisions of the new law. The IRS plans to provide further guidance throughout the year. Expect some changes. 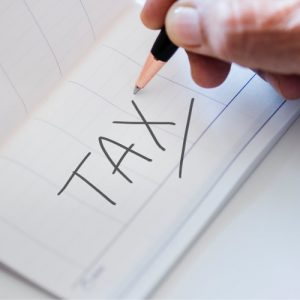 The IRS came out with new withholding tables on January 11th and just released a revised W-4 form and calculator (You can find a link to the IRS website HERE). If you leave your W-4 as is, you could wind up withholding too little. Workers in higher tax brackets who receive large bonuses could see higher tax bills if they don’t adjust withholdings on “supplemental income.”

A significant change that could affect many taxpayers is the cap on state and local income tax (SALT) deductions. The deduction, which used to be unlimited, will be capped at $10,000 in 2018. The new law’s near-doubling of the standard deduction to $12,000 for single filers and $24,000 for married couples filing jointly does mean fewer will itemize, but residents of high-tax, high-income states could end up paying much more. States are busy devising workarounds to try and keep those residents from seeing a big spike in federal taxes next year or moving to a lower tax state. Strategies being explored include replacing state income taxes with an employer-side payroll tax and a scheme of tax credits for charitable donations made to state funds that support areas like education and health care. It’s unclear whether these attempts will prove administratively or legally feasible; I wouldn’t count on it.

In an effort to get around new deductions limits (e.g. SALT), many folks who make regular charitable donations may bundle gifts in one year what they would have given over multiple years. For those who itemize, charitable donations remain deductible on federal returns and can help lift married taxpayers who file jointly above the $24,000 standard deduction hurdle. By putting these bundled donations into a donor-advised fund, individuals can take the deduction the year the money goes in and distribute the money to charity over multiple years. Having said that, there are numerous tax-advantaged giving strategies to consider and Westover has the experience and wisdom to help you choose the right one. Let’s talk.

The deductibility of interest on home equity loans and lines of credit (HELOCs) is a big area of confusion. The new tax law lowered the amount on which interest expense on “acquisition indebtedness” could be deducted but eliminated the interest deduction on loans that are not used to buy, build or substantially improve a primary home (aka “home-equity indebtedness”). Caution: seek tax advice on this one. There are numerous caveats, grandfathered provisions, rules regarding “mixed-use mortgages” and partial deductions. Clear recordkeeping and documentation will be critical if you plan to take a deduction.

The new tax law expands the allowable use of tax-exempt 529 college savings plans for education costs from kindergarten through 12th grade. While some states automatically follow the federal code, others choose to decouple from certain parts of it.

In other words, the U.S. government may say you can use 529 money for K-12 expenses, however, your state may consider such a withdrawal as a non- qualified distribution. Confusing? Tell me about it. When I called my state tax department for clarification, they weren’t even sure what a 529 was. I’m hopeful more guidance will be coming out this summer. In the meantime, be careful.

Does the tax law present any retirement strategies for consideration? Possibly. Withdrawals from tax-deferred retirement savings plans such as 401(k)s or traditional IRAs are considered “ordinary income” and will raise your taxable income, however, lower tax rates may make a Roth IRA conversion even more attractive than in the past. Pay some of the taxes now and take advantage of lower tax brackets while avoiding a potential “tax time bomb” when you are required to take required minimum distributions (RMDs) in retirement.

Maybe it’s true that you can’t tax thinking but thinking can certainly minimize taxes. I think Charles Kettering was on to something.

*Charles Franklin Kettering (August 29, 1876 – November 25, 1958) was an American inventor, engineer, businessman, and the holder of 186 patents. He was a founder of Delco and was head of research at General Motors from 1920 to 1947. Among his most widely used automotive developments were the electrical starting motor and leaded gasoline. In association with the DuPont Chemical Company, he was responsible for the invention of Freon refrigerant for refrigeration and air conditioning systems. At DuPont he also was responsible for the development of Duco lacquers and enamels, the first practical colored paints for mass-produced automobiles. In 1927, he founded the Kettering Foundation, a non-partisan research foundation.