News happens fast now. Today’s new and timely story will soon be tomorrow’s forgotten tale. It is easy to miss things now because of how quickly stories get turned around, as our attention is diverted to the next “New, New Thing”. Daily, we are inundated with a veritable fire hydrant flow of news through social media. Every so often, we need to take the pedal off the gas, step out of our fast lane; we need to slow down just for a minute to appreciate and celebrate a notable and newsworthy accomplishment. This is one of those occasions.

Chip, Matt and I want to congratulate our close and dear friend, George Alderman. George has just been inducted into the Delaware Sports Museum and Hall of Fame for the class of 2019. 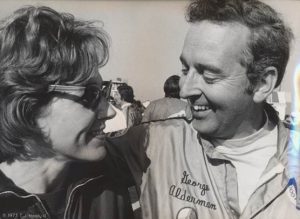 The picture above is early-‘70s and George is celebrating another race car victory with his dear wife, Marilyn, who passed away a few years ago.

George grew up in Delaware, graduating from Newark High School. In addition to owning Alderman Automotive, George Alderman Racing and the local Datsun/Nissan dealership back in the day, his avocation, which he pursued with a true passion, was race car driving.

He competed in his final race just a mere two days shy of his 70th birthday.

Please join us as we salute George for this wonderful recognition!